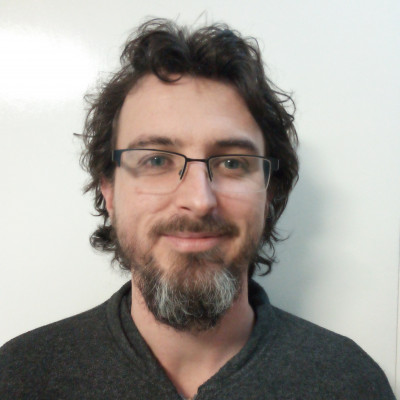 "It's satisfying to challenge your ideas with data, and chip away at scientific problems which are of genuine significance for managing the risk of natural hazards."

I grew up in Newcastle in the suburb of Adamstown. My parents still live there, in the same house I grew up in.

My current field is tsunami hazard -- where might tsunamis occur, how big, how often, how certain can we be? I've also worked on other topics, but mostly focussed on the coastal zone. Most of my research involves maths and modelling.

Although I've loved the coast for as long as I can remember, I only became enthusiastic about maths in my mid-teens -- and I essentially didn't know anything about computers and modelling until after my undergraduate degree, even though I studied science (maths and
geography). After undergrad I decided to do a PhD in coastal geomorphology, focussing on the shape of tidal estuaries and channels. This is when I really learned the power of physics and computation to explain and visualise physical phenomena, such as why landforms have particular shapes, or why tsunami wave heights vary so much from place to place. Following my PhD I started working on various coastal hazards modelling projects at Geoscience Australia, including on tsunamis.

Yes, but I've been working from home since 2012, so it's not COVID related. It works very well for me. Since COVID I find video conferencing has become much more popular, so I'm interacting with colleagues more often if anything.

Yes, I live in Melbourne which is under stage-4 restrictions right now, so both of my kids are at home, and my partner works from home most days as well. In general we like it, although my kids are keen to see their friends, and sometimes it can be stressful to juggle our jobs, remote schooling, and home-life. We also have a dog -- a 5 month old kelpie named Jim. I hopeful that at some point he'll be able to sit quietly in the office with me. For now he likes chewing the furniture too much.

To understand tsunami hazards, one often wants to simulate a set of hypothetical earthquakes and their associated tsunamis, to see how big the waves would be, and which areas would be inundated. To justify this we want to be confident our models give a reasonable representation of real tsunamis, given the input earthquake location and magnitude. It turns out that real earthquakes are quite diverse, not just in their magnitude and location, but also in the spatial pattern of rupture, and this affects the resulting tsunami quite a lot.

To test our models, I've been comparing simulated tsunamis with historic tsunami observations at tide-gauges in Australia. Essentially we are checking that the wave heights are approximately correct, that the tsunamis decay over time in approximately the right manner, and that the modelled tsunami variability is reasonable. This gives us the opportunity to notice any shortcomings in the models that were not evident in our earlier tests, and to propose improvements to the models. The work will feed into some guidelines for tsunami hazard assessment in Australia.

Separately I'm also collaborating on tsunami inundation hazard assessments for a couple of southwest Pacific sites, closer to the "Ring of Fire" where the hazard is generally greater than in Australia.

Australia is not completely immune to tsunamis. The risk is lower than in some neighbouring countries, but if you hear a warning you should take it seriously!

I really like the coast -- it's hard to explain why but I'm sure many people feel similarly. When doing modelling we often work with high-resolution imagery and topographic datasets, and this is a great way to appreciate the geometry of coastal landforms -- you notice things that wouldn't be easy to notice if you visited the site, but become evident at larger scales. My job also lets me do lots of math and computing, which is good because I've somehow become addicted to these things over the last 15 years. Writing code feels very peaceful when you're in the right mood. It's satisfying to challenge your ideas with data, and chip away at scientific problems which are of genuine significance for managing the risk of natural hazards. It's also great to interact with colleagues who are enthusiastic about similar topics.

I'm proud to have learned enough to work in science and try to advance knowledge. But I expect my best scientific contributions will be superseded in future, because in my field things constantly improve as we get more data and computing power. While the achievements of the past shape how that is done, I'm reluctant to get too attached to specific achievements -- I'd rather be attached to ruthless improvement!