NCI Australia and the Pawsey Supercomputing Research Centre are pleased to announce the outcomes of the 2023 National Computational Merit Allocation Scheme (NCMAS).

A rigorous merit-based assessment conducted by a diverse committee of national leaders in computational science reviews all proposals to determine their significance, scientific merit and computational methods.
Just under 817 million units of computing time were allocated this year across the Gadi and Setonix supercomputers at NCI and Pawsey, equivalent to 770 million core hours. These allocations represent a 40 percent increase in computing power compared with 2022 (581 million units) and a 105 percent increase in 2021 (398 million units). 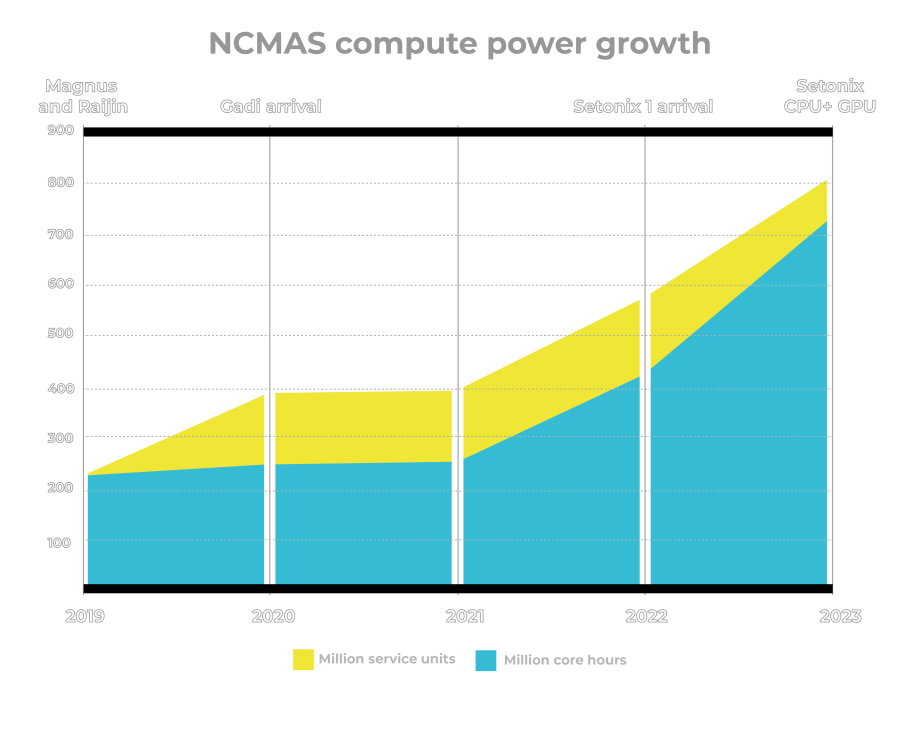 The growth in computing power available to Australian researchers is the result of government investment in national research infrastructure. It is in response to the ever-growing needs of the Australian computational science community.

The successful applicants come from research institutions across the country and span a huge range of scientific disciplines, including fluid dynamics, particle physics, materials science, climate simulation, bioinformatics and many more. They will have access throughout 2023 to Australia’s leading supercomputing facilities to complete their high-impact computational science.

In total, there are 146 successful applications in NCMAS2023, a 77% success rate and with the scheme 1.6 times oversubscribed. Fifty-nine of the successful projects have been allocated computing time across both of the facilities.

Setonix and Gadi are together providing the largest allocations ever granted through NCMAS. The Gadi supercomputer will host 135 projects through NCMAS in 2023. Sixty-five projects will run on Setonix CPU, while 26 research projects will gain access to Setonix GPU.

The largest single grant of compute time this year went to Professor Richard Sandberg from the University of Melbourne, who was awarded 50.6 million units of computing time across Gadi and Setonix.

This is just one example of the game-changing science that supercomputers enable with the Australian Government’s support. NCMAS is supported by the National Collaborative Research Infrastructure Strategy through the Department of Education.