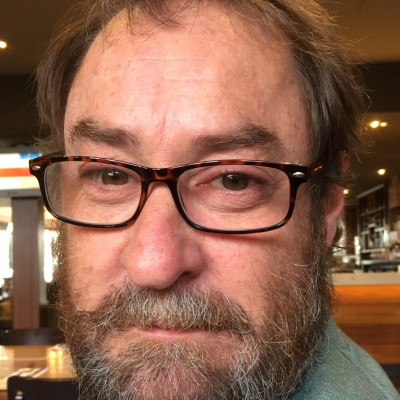 "Hadn’t really thought what was next in life but saw an ad in the paper for what was the latest application date for any PhD program in the country. Everything else was long since closed. But with mathematics you can do pretty much anything in science."

I am still growing up and have lived in 35 homes. My childhood was mostly in Melbourne apart from a year in Albany (WA) where we had a secret cubby house under the government truck weigh-bridge down at the docks near the whaling station. I was only 6 but knew in my heart that we should not play in that tight space when the trucks came in.

It was 1973. I remember seeing a blue-ring octopus when exploring the storm water drainage system. My sister said if I touch it I will die. It struck fear through my heart and I still won’t touch one.

There was a time I wasn’t really interested in anything. I don’t think the phrase existed back then, but I did spend 4 years as a ‘functionally homeless’ dole bludger before uni. Something lifted me out of that world. The love of a dog. Over time I developed an interest in mathematics and did quite well with that at Deakin University during the so-called “recession we had to have”. Youth unemployment was 33% at the time in Geelong.

I stumbled into a PhD with the Antarctic Cooperative Research Centre at UTAS back in ‘94 quite by accident. Hadn’t really thought what was next in life but saw an ad in the paper for what was the latest application date for any PhD program in the country. Everything else was long since closed. But with mathematics you can do pretty much anything in science. I started up with modelling the Southern Ocean and sea ice. My interest in climate change science has been growing ever since.

As an astute observer of human nature, I would advise all computer modellers to try it in the field with the observational folk. Stick a thermometer five kilometres deep right into the bottom of the ocean. A Jane Goodall moment, live amongst them, learn their language and habits. Scientists like science are amazing.

My current home crawls with redback spiders. They are like special-ops forces rappelling down on tight lines. I don’t use lights because of the carbon emissions. I dread that dark late-night feeling hitting a line. Really tight. Do they jump? It is better in the day when natural light plays shiny tricks. The watery late autumnal sunshine obliquely revealing the silvery flash of a strand of web in the corner of my lounge. From that exact angle at my desk. Beautiful.

So how’s it going? It seems too good, even though my computer says I am clocking a 14x7 98-hour work week. OK, I did spend some time on the news sites. I dread going back to the office. I keep thinking of Colonel Walter E. Kurtz’s letter in Apocalypse Now: “Sell the house. Sell the car. Sell the kids. Find someone else. Forget it. I'm never coming back. Forget it.” But how to tell the boss? And what’s with all the meetings?

I wish I did. My dog exists now only in my memory. Her name is Jess. I met her at Terang railway station in Western Victoria back in ’88. I was seeing off a friend as the train came in. Suddenly a dog was on the tracks, running ahead of the train. The driver was blasting the horn over and over and over again. A train too fast for a dog too slow. Panic pervaded the platform. Another friend jumped onto the tracks at the last moment to grab the dog. The train raced in, brakes screeching, horn blaring. Some school girls shrieked. An old lady clutched at her chest. There was fear and confusion. After the train left a great feeling of relief swept over the crowd. My friend and the dog were standing on the far track quite safe. Nobody died that day.

The dog jumped to the platform, weaved through the crowd, and sat obediently at my feet. She was about 6 months old, a beautiful black and white sheep dog with diamonds in her eyes and a ruby red lolling tongue. The enraged station master stormed down the platform loudly abusing me for letting my dog on the track. A public menace! I said not mine. He said bullshit and stomped off angrily muttering about calling the cops. We left in a hurry, and Jess stayed with me over her long dog life. I shared an office with five other PhD students. Often Jess came along. Everybody loved her. Dogs are amazing.

I have a daughter. She works in the National Incident Room at the Department of Health. She took the call to Australia from WHO on New Year’s Day, her first week on the new job. We have a novel coronavirus they said. We talk each weekend which helps me stay abreast of the situation. She is certainly not a hindrance. I was pretty pessimistic back in early February and asked her to do the maths: 7 billion people, 50% contagion, 2% death. That’s a 70 million global fatality. Her team has worked really hard on Australia’s response. Very proud of her.

I supervise two PhD students. Fabio has submitted, and Abhishek is well on the way. They both do great science on ocean heat uptake and sea-level rise associated with climate change in our national ACCESS climate model. Did you know that the ocean holds 93% of the human-induced additional heat that has entered the climate system since 1960? It’s not going anywhere soon. PhD students are amazing. Like caterpillars becoming butterflies they will become doctors.

We hammer the NCI peak-system and were delighted to double-down with the recent Australasian Leadership Computing Grant to deploy on the newly commissioned Gadi machine. It’s a credit to the maturity of our modelling system. Gadi is a credit to Australia. Supercomputers are amazing. I also partner with the Centre of Excellence for Climate Extremes. There is so much new scientific understanding from the next generation.

Aside, I keep a project going as a Workplace Delegate of the Community and Public Sector Union (CPSU). I felt I could a make a difference there. COVID-19 really highlighted the issue of workplace rights like sick-leave.

When people meet a climate scientist a common question comes: “Is it real?” Please stop that and understand science is real. My professional response is the global modelling. Medical science just hit the conundrum of fast moving and rapidly evolving information of a novel coronavirus meeting a politicised socioeconomic response. Climate science confronted a similar situation for decades. I am grateful to Ed Yong at The Atlantic for sharpening my thoughts on that.

I have a natural curiosity. Why? (Yes, that’s a hyperlink. Click on it and hear a nice song.)

What is one thing you achieved that you are proud of?

With research I’m proud of the climate models that I contributed to. Such models provide our primary knowledge of future climate. They underpin the Intergovernmental Panel on Climate Change Assessment Reports, and impact on policy through the likes of the Paris Agreement.

I hope so. Humans are amazing. The most compelling evidence is your invitation to participate in the “Humans of NCI” project. Which reminds me of Blade Runner. It’s about an android who believes he is human. He works as a cop “retiring” other androids who wish they were human but aren’t welcome around here. He hates his job but still does it. Like a computer scientist.

What does it mean to be human? I don’t know if anyone knows. The quintessential existential question. Maybe the dogs know.