Australia’s newest and fastest supercomputer is a game-changer for the country’s leading scientific institutions. Gadi, meaning ‘to search for’ in the language of the Ngunnawal people, will strengthen Australia’s capacity to perform world-leading scientific research, and will directly contribute to the safety and wellbeing of the nation.

The supercomputer, based at the National Computational Infrastructure (NCI Australia), has placed at 24* on the TOP500 list, a global ranking of supercomputers released overnight at the ISC High Performance Digital Conference. Gadi is the most powerful supercomputer in the Southern Hemisphere.

ANU Vice-Chancellor Professor Brian Schmidt said the new supercomputer will help Australian researchers tackle and solve some the most profound and pressing issues of the coming decade.

"Gadi will give researchers the tools to unlock the mysteries of the universe, predict and manage natural disasters, advance cancer research and design new materials for future technologies”, said Professor Schmidt.

Professor Sean Smith, Director of NCI, sees Gadi as a significant and important evolution of high-performance computing for Australia.

“The computational performance available on Gadi is unprecedented in Australia, enabling rapid response to national emergencies such as COVID-19 and bushfires that we could not have approached before.” explains Professor Smith.

“We have over five thousand users that rely on NCI’s unparalleled high-performance compute and data services to produce world-leading scientific research. With Gadi now fully operational, these users will be able to perform their work faster, and with greater precision. Gadi is, quite simply, a critical foundational infrastructure for Australia and Australian research.”

The Bureau of Meteorology, CSIRO, Geoscience Australia and The Australian National University are all major collaborators of NCI and are set to utilise Gadi to its fullest potential in the coming years.

“At CSIRO, we solve the greatest challenges using innovative science and technology, and Gadi will enable our work in Earth sciences including climate, land, water and fire modelling. The data that Gadi will process and analyse is collected here on Earth as well as by an increasing number of satellites orbiting our planet.”

These computational models will contribute to the CSIRO Decadal Climate Forecasting Project (DCFP), which is already producing near-term climate forecasts with ever-increasing accuracy. Gadi will assist this project by facilitating a move to even higher model resolutions of the atmosphere and ocean, with fast data processing and increased model accuracy.

The Bureau of Meteorology is leveraging the new computational power of Gadi to produce sub-kilometre coupled fire-atmospheric models. Known as ACCESS-Fire, this model represents the complex interactions between the heat of the fire, the release of moisture, and atmospheric circulations. Such models can predict the path of a fire as well as the spread of smoke. These predictions have the potential to reduce the risk to communities and firefighters now and into the future.

“The Gadi supercomputer will be used to support transitioning the experimental models to routine operation. Improvements such as those from the fire model and specific event case studies are used to better plan fire suppression operations, reduce risk to firefighters and assist the community in affected areas."

Similarly, Geoscience Australia will use Gadi to run sophisticated models generating large swathes of data to estimate the risks associated with other potential natural disasters.

“Without the NCI, we would not be able to compute the huge data needed to assess the risks associated with hazards such as earthquakes, tsunamis and tropical cyclones. I’m looking forward to seeing how this new supercomputer will enable further work at Geoscience Australia to ensure a better informed nation.”

Geoscience Australia also develops a national assessment for the hazard of tropical cyclones. The Tropical Cyclone Hazard Assessment is the basis for collaborative projects with Queensland and Western Australian emergency services where the potential impacts of future possible tropical cyclone scenarios is being investigated so that communities can be better prepared for these kinds of events.

These and many other critical environmental assessments will be improved with the technology now available through Gadi.  With an increasing availability of computational power, as well as significant data storage and management services, researchers at Geoscience Australia and other institutions can perform more precise simulations, producing more accurate results.

In addition to these major collaborators, NCI also has agreements with dozens of Australian universities, ARC Centres of Excellence, and medical research groups such as the Garvan Institute of Medical Research and Victor Chang Cardiac Research Institute, representing thousands of Australian researchers across the spectrum of scientific disciplines. 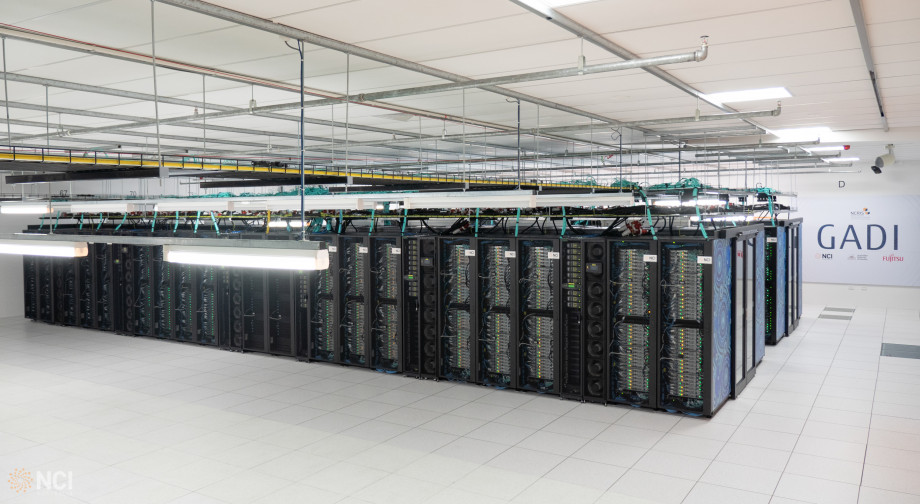 About NCI
NCI Australia is the nation’s most highly-integrated, high-performance research computing and data science environment. Based at The Australian National University, it brings together the Australian Government, universities, national science agencies and industry. Major Collaborators include ANU, CSIRO, the Bureau of Meteorology and Geoscience Australia.

As well as the unique NCRIS $70 million investment to upgrade infrastructure which enabled NCI to build Gadi, NCI currently receives approximately $6 million per annum from NCRIS to support its operating costs. In total, NCI has been allocated more than $210 million through Federal Government funding since 2006.

What is a supercomputer?
A supercomputer is a cluster of thousands of powerful computers connected to each other with high-speed optical fibre cables. This lets researchers combine dozens, hundreds or thousands of processors together to run single calculations, sharing tasks between the processors and making some kinds of scientific research possible for the first time.

Gadi is the 24th* most powerful research supercomputer in the world, and the most powerful in the Southern Hemisphere. It has 148,800 processor cores capable of performing more than 9 quadrillion operations per second. This is the same number of calculations that would be done if a full Melbourne Cricket Ground's worth of people all had their smartphones running at the same time. Running 24 hours a day, 7 days a week, Gadi is the underpinning infrastructure for much of the Australian scientific community.

About Gadi’s name and artwork

Timelapse video of the Gadi build